Slim is our four and a half year old border collie and Rottweiler cross, and as you can imagine, he is full of energy and mischief...and very clever. Although this has had consequences.

As the result of a squirrel chasing accident when he was two, Slim dislocated his hind leg, and it soon became clear that the ligament had ruptured leaving nothing to hold it in place. This meant that his leg repeatedly dislocated as he moved, causing him great pain. He had surgery to implant a new synthetic ligament, and had to stay in a crate for 8 weeks to recover before beginning physiotherapy. A month into his therapy, the implant failed and his leg dislocated again, but this time there was only one option left...a hip replacement.

At two and a half, Slim underwent the hip replacement, and had to spend a further 8 weeks crate bound, followed by even more weeks only allowed in the garden on a lead. Eventually we were able to start building up his walks again, from 5 minutes three times a day to 30 minutes over the course of the next 6 months. It was a very long and painful process for him, but he’s such a trooper!

Nowadays he is back to his normal chaotic self; fetching sticks, swimming in streams and rolling on his back in the grass. My husband and I have our own business, so he is able to come to work with us and meet the customers every day.

To add your own pet please email petpictures@pettrac.co.uk

<< Back to pet picture gallery 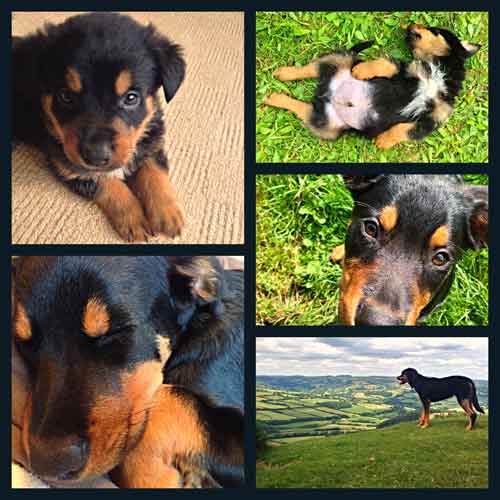